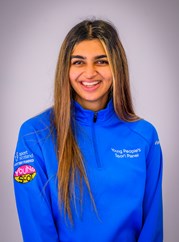 Future aspirations: To become a PE teacher and also explore and travel the world.

What sports are you involved in and what is it that you love about them?

I play netball and basketball and I’ve been playing both since I was 8. I love the social aspect of these sports, the friends I make, the people I meet when I travel to play games, the vibes and ambiance of game days and when you know you have a match the next game so you lay out your kit the night before and as much as I try to go to sleep you can’t, because I’m so excited!

I am absolutely loving every single second of being on the panel so far and I am even more excited to get further involved in the future, the staff have been so welcoming and supportive as well as the individuals on the panel, such a variety of people and experience! The work I am involved in so far has me so intrigued as I thought I knew everything about sport, but since my first time on the panel it has really opened my eyes in areas i didn’t even know existed within sport!

I think some of the challenges young people face in Scotland today is the lack of development being made available to young people. More or less the knowledge of how to progress within sports after a certain age/ level.

If I could change one thing about sport in Scotland it would be to have mixed teams within sport for all sports, not boys here and girls there but a unity of gender within sport as I see no reason to why it’s not been like this from the start!

One role model of mine since I attended one of his basketball camps years ago is Kieron Achara, he is such a positive and inspiring person and the work he carries out he truly believes in and wants to make a change.