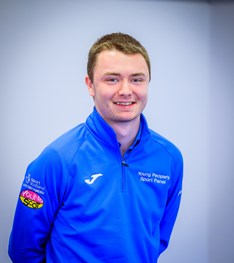 Proudest achievement: Being the Head Boy at Perth Academy

Future aspirations: To become a successful actor. To score a half-century for Doo’cot. To pass my driving test!

Interesting fact: Despite being a proud Scotsman, I was actually born in Douglas, on the Isle of Man.

I’m a bit of a jack of all trades when it comes to sport, however, my main two are football and cricket. I am currently in my final season playing for Scone Thistle F.C. Under 19s. Having lived in Scone for as long as I can remember, it feels very meaningful to have pulled on the red and black shirt, most weeks, over the past few years. Scone are also the only club I’ve ever played for, so I feel a real sense of loyalty to the club. In cricket, I also play for my local club, Perth Doo’cot CC. Doo’cot are a really great club with wonderful facilities and a great atmosphere, so I feel very lucky to have such a club just down the road from me. I only started playing for Doo’cot last year, so I’m still pretty new to the club, and indeed the sport. I really enjoy nets and of course games, and I feel like I’ve improved a great deal since I started playing. I’ve also been involved with cricket coaching, first through my school, and now with Doo’cot. This is a great opportunity to give something back and show young people that cricket really is a sport for everyone. I’m also an avid runner, and I play a bit of badminton and hockey at school. I think the thing I love most about sport is how it can allow me to forget about all the stresses of everyday life, and just live completely in the moment.

I was motivated to apply for the YPSP because I wanted to have some great experiences, making a positive impact on the lives of young people. I have seen first-hand that sport can do incredible things for young people. I really don’t know where I would be without sport. On the other hand, I know that sport doesn’t appeal to everyone, and for a whole bunch of different reasons. So if I can get more young people involved in sport, that would be a great achievement!

I’m loving the YPSP so far! I feel like the whole panel (+ Nicola & Erin) have all bonded a lot, despite the fact we’ve barely been able to meet each other in person. I would also give a shoutout to all the project team who have been so welcoming to us all. I think we all feel like a part of the sportscotland family now! I can’t wait until restrictions ease a bit more and we can all start making the sort of positive difference that we want to make. I’m currently involved in both of the side-projects we’re working on. One is a new podcast which we hope to get up and running very soon! The other is a resource based around writing about sport in CV’s, UCAS applications, etc. We’re also getting our project groups organised now, so hopefully that will help us focus our energies into some great work, moving forward.

Sport provides such a level playing field (no pun intended!) for young people to better themselves and those around them. While the development of young people’s sporting ability is important, , I think it is really the skills for life that young people can take from sport, that are even more important. The leadership skills I have gained from coaching have been so important for my development. I’ve also improved my communication skills through playing sport. Skills like these have huge real-world application. Having sport as the tool through which we can get young people “through the door”, and then giving them opportunities to develop more widely as people; that is how sport can help support young people, in my view.

I think if there was one thing I could change about sport in Scotland, it would be to close the gap between state schools and private schools, when it comes to sport. It is clearly not a coincidence that so many of the Scotland teams in cricket, rugby union, hockey, and so many more, are made up of largely privately educated men and women. If we could bring the level of coaching, facilities and opportunities that private schools get, to state schools, I believe that Scotland would greatly improve its performances at international level. I believe that if we did this, there might also be a trickling-down effect which would inspire more young people to play sport. If you have successful athletes from your area, why couldn’t you be next?

I’m really inspired by a lot of different people all the time. I think I’m a bit unique in that I’m very passionate about a whole load of things. For example, I love film, so I’m really inspired by a number of different directors and actors. I would also say I’m inspired by a number of musicians as well. If I’m honest, I don’t think there are really any sportspeople who inspire me. I’ve always just thought that hard work is the way to success, so I always try to live by that.