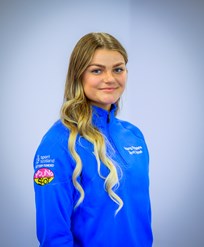 Education: University of the West of Scotland (Sports Development)

Hobbies: Outside of sport I like to explore places within Scotland and spend quality time with my family, friends and extensive range of pets.

Proudest achievement: Coronavirus has put a stop/restrictions to many things for us all however this situation has taught me to think outside of the box and how to implement this. As a netball club, we have managed not only to secure an outdoor space but also get this space repurposed to accommodate our sport. This is one of my proudest achievements as a person but also as part of a sports club.

Future aspirations: My aspirations are to qualify from my University degree  and then specialise in further education teaching or physiotherapy. I want to be a part of the continual growth of women and inclusion within sport and contribute to the development.

Interesting fact: I used to have a job exploring Scotland on horseback and lived in Campbeltown for 6 months

Before the pandemic I was involved in multi sports as a coach for the council which has enabled me to try my hand at basketball, netball, badminton, tennis, athletics, coaching those with additional support needs and gymnastics. However, my main sports are netball and horse riding. I have my own junior club, Netball Fever, where I coach and mentor and I used to play for Scotstoun netball team within the Glasgow senior league. I’ve been horse riding since I was 7 years old and have been hooked ever since! After getting my first horse at 13, I’ve had the opportunity to compete in show jumping, dressage, showing and training in cross country. This experience led me to a job touring Scotland on horseback around some of Scotland’s most beautiful places such as Knoydart, Argyll, Campbeltown and Fife.

I have been encouraged over the years by my Active Schools Coordinator to get involved but it never felt like the right thing to do until last year. My college lecturer approached the class about the opportunity, and she spoke to a few of us individually and it was then that I felt this is something I would be able to do. Being a youngish person myself I have always wanted to encourage others into sport because I know the benefits first-hand. I knew from others’ experiences on the panel that it has had a real impact around accessibility of sport which motivated me to get involved and see where I can pitch in from the experiences I have had.

We know it is early days - what do you think of the YPSP so far and what work are you involved in?

Without being cheesy, it’s super cool. Sport is a tight community and this programme offers further networking with other motivated individuals like me and supportive staff from sportscotland. Given the current situation it’s been great to make these connections after feeling disconnected during the lockdowns which has been amazing. Currently I am part of the podcast team where we hope to set up a YPSP podcast that targets young people where we talk about topics such as mental health, inclusion, sport and many more. This will be hosted by two members of the panel and include guests for the panel, those within sport and other organisations for example SAMH.

Young people face many challenges as we know and the biggest one is society and the pressures it reflects on young people. Sport has always been used as an escape, a safe place where there are no ‘political’ factors, but we all know that’s not true. There are many barriers placed on young people by society such as race and ethnicity, availability of access and a big one recently has been social media. Social media is the new shop window these days where everything is broadcast to be seen by everyone and most believe what they see/read. Although social media can be a great place for educating people, sharing ideas and connecting, it can also be a negative space where people feel judged and pressured which can affect their confidence and willingness to try new things such as sport or the desire to continue with sport.

Sport can be a safe place for all to offer multiple opportunities for people to network, improve their skill set, gain personal achievements, and just feel good about what they’re doing and their ability. It can be a place that reduces or eliminates barriers and promotes inclusion. The more the positives of sport are seen, the more it will be possible to battle barriers faced by society.

I would love to change accessibility. I want everyone to get the same chance to access sport, participate and feel the benefits in a non-pressured environment. Playing sport gives you such a buzz and builds its own community support network that is amazing to be involved in and I wish everyone had the same access and opportunity to this.

Cliché as it is, it’s my gran. My gran is always challenging me, supporting me, and letting me talk her ears off if I ever need to rant about something silly! She has been the best role model to teach me about the importance of family and a supportive network, happiness, strength of a woman and her famous motto of “what’s for you won’t go by you”. I admire her strength, her ability to overcome challenges and love no matter what. She inspires me and has shown me that regardless of age you can still learn, develop, and try new things.