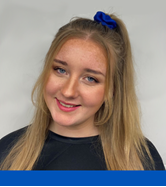 Hobbies: Outside of sports and keeping fit, I enjoy being creative, including: video-making, baking, playing guitar and singing. I also enjoy spending time with friends, reading and watching movies.

Proudest achievement: Apart from gaining a place on this panel, my proudest achievement would be the following: Straight after my 6th year at school, I was successful in being selected for the Project Trust Volunteer Programme. I spent the next 12 months in the Dominican Republic

Future aspirations: The future is very exciting and utterly unpredictable, but I aspire to always work extremely hard, be kind and ultimately stay happy. I am currently applying to Glasgow University to study Law and Spanish.

Interesting fact: In 2014, I played in the U17 European Netball Championships in England, and gained a cap for Scotland!

What sports are you involved in and what is it that you love about it?

Sport has been a huge part of my life from a very young age. The two main sports I am involved in are netball and tennis. Firstly, I started playing netball in primary school and went on throughout different stages, eventually representing my the national U17 team at a European tournament when I was 15. I would say the thing I love the most about netball is the wide variety of skills I have gained from playing it over the years; these include team-work, self-discipline, a strong work ethic, excellent time management and many more. Tennis has also been a huge passion of mine and alongside going to weekly lessons since I was 4, I have been a children’s Tennis Coach for 7 years now and I have a UKCC Level 2 Qualification. I absolutely love teaching children of all different ages the sport and it is an extremely rewarding job.

When I first heard of the YPSP, I thought it sounded like an incredible opportunity to get involved with. I have been extremely lucky to have had sport as part of my life growing up, and have experienced all the benefits that have come from that. However, I know many other children are not in that position, and so I really would love to try and help encourage change so that more people are.

I think the panel have done a brilliant job considering the circumstances. It has been a real disappointment that we haven’t been able to meet in person, but I do think the group chats and various video calls and meetings have allowed us to get to know each other as much as we can right now. I also think the panel has shown a massive amount of energy and enthusiasm and we already have so many ideas. We have been encouraged to share all our ideas of future projects etc and there were hundreds which is amazing!

We have had the chance to hear from and speak to many different professionals in sport and hear their opinions and views. This includes various people involved with schools in Scotland as of course a huge way to get young people involved in sport is through the education system. We have started a podcast for young people about sport which is very exciting and I’m heavily involved in producing each episode.

I think some main ones are mental health problems, inequality and difficulties in accessibility. There are many different aspects to these challenges and hopefully as a panel we can carry on trying to pick apart some of them and reach a better future.
Some sports are very inaccessible to many young people as they are for example too expensive or too far away. Other young people face the problem that no-one around them is encouraging them to take part in sport and so without this, they are extremely unlikely to get involved. At a more systemic level, although lots of initiatives are happening within the schools, there is still a big divide within sports in schools in more affluent areas, and more deprived areas.

I am a strong believer that sport can improve someone’s life massively, and the younger they start getting involved, the better! From personal experience, and of course looking at lots of other evidence, there is no doubt that being physically active can improve one’s mental and physical health. I think sport could be one of the ways of tackling the mental health crisis that Scotland’s young people today unfortunately find themselves in. Just taking a young person off their screen and onto a court, where they need to problem solve, communicate and move around could be the most incredible change.

If I could change one thing about sport in Scotland, it would be the attitude towards P.E in schools. For me, P.E was seen as a very ‘easy’ and ‘unimportant’ subject by most of my peers in school. Even though I agree it should be thoroughly enjoyed by young people, I still think P.E should be seen as more of a priority, and taken more seriously. I would love to see a requirement for every teacher in every class to implement even 5 minutes every hour of some form of physical activity into their lessons. This could be as simple as star jumps and stretching. I also think young people should be informed about the immense benefits that playing sport and getting involved in it has in just about every aspect of their life in the future.

I would say my biggest role model is Michelle Obama. I listen to her podcasts, watch her videos and I read her autobiography ‘Becoming’. She is incredibly inspiring! Her positive, ambitious, hard-working energy is infectious and she encourages everyone to be the best version of themselves. She also launched a brilliant initiative called ‘let’s move’, which is dedicated to solving the problem of obesity within a generation in America. The five pillars of the initiative are very similar to the focuses of the YPSP, and I really admire her morals and her work.