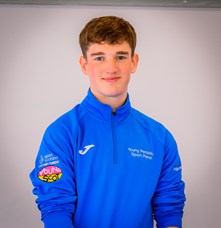 Sport: Football and going to the gym

Hobbies: This is the toughest question! I don't think playing FIFA counts either. I love learning languages and learning about other cultures so I like to watch travel videos on YouTube. I have also played the guitar since I was 5.

Proudest achievement: Becoming Head Boy at my school and helping raise over £2000 for Movember.

Future aspirations: I hope to go to university and study Psychology and Spanish. I would love to travel across the world, working in the sports industry!

Interesting fact: I met Robin van Persie while on holiday in Spain after spending 20 minutes trying to work out if it was actually him.

I am extremely lucky that throughout my childhood and even still I’ve been able to experience and participate in such a range of sports. My first love was rugby, playing a huge amount in primary school for Stirling County where I now coach. I could describe myself as a bit of a ‘rugby nause’ and have a huge love for the club Harlequins. Shortly after rugby, I spent a few years in athletics and playing tennis, before high school opened up the opportunity of playing football for my local club Milton AFC through which I made my best friends and gained more coaching experience. Now having just started at Glasgow University, I am fulfilling a dream of 10 year old me of competing in road cycling. Growing up I was fascinated and inspired by Britain’s decade of Tour de France success and now I’m getting to pretend that the hills of central Scotland are more like Alpe d’Huez and Mount Ventoux!

I’ve always enjoyed and felt natural in leadership roles, even from a young age and get great satisfaction from helping, supporting or being involved in change or progression. Couple those attributes with my ever-lasting love for sport, the YPSP seemed like the perfect opportunity for me at this age. With my desire of working in the sports industry as a psychologist, it also appeared to be the ideal opportunity to work alongside like-minded individuals and make connections for the future.

I have loved my YPSP experience so far. Despite, at first, being a little uncertain as to how we’d be able to socialise, bond and progress as a group while being only online, I can now see how far we’ve come. The first year as a panel we worked all virtually yet achieved so much and still had so many opportunities offered to us. Having just met in person for the first time last week, there was an incredible buzz and excitement amongst everyone as we discovered those virtual relationships we made were so very real.

As a panel we spent the first few months getting an idea of how everything with sportscotland worked, previous panels achievements and our aims as a new group going forward. I am currently working with the Schools, P.E and Education focus group where we are looking at improving young people’s experiences of sport in education. On top of that, involvement in the likes of #SportHour, sportscotland and Young Scot initiatives and CPD sessions. Furthermore, I have been involved with my local sports council to understand impacts at a local level, thanks to my panel involvement as well as countless other opportunities.

Reflecting on how young people’s lives looked this time in 2019, compared to now, the challenges that they now face may not have completely changed, but they certainly have evolved. While the resilience, adaptability and courage that young people have shown over the last 18 months is easy to notice, the challenges they now face may be harder to spot.

As we move forward, ensuring the balance in young people’s lives I think will prove to be one of the biggest of these challenges. For example, the advancements of technology have been vital for the last year but the importance of social contact in a young person’s life still has to be prioritised. I consider myself very lucky that when I was young, coming home from school would mean going out to play, I’m worried that nowadays that trend is changing. The detrimental impact of this change, both physically and more alarmingly mentally, in socialising, playing and finding entertainment online have already been seen, in both contexts of boys and girls. Moving forward, there must be a collective effort to ensure that young people keep that balance of real life and virtual experiences.

Sport in a young person’s life can be compared to a bit like money. A tool that, when used right can benefit someone’s life immensely, but also, poorly managed or a bad experience with it can be degrading to a young person’s life. What I love about sport is that it has the capability of supporting every young person in Scotland, no matter their background. It brings physical, social and emotional benefits. Sport can be used as a motivator, opening young people’s eyes to the idea of success and achievement - making them try to find this across other areas of life. It can also be an escape for others, a relaxing or enjoyable time away from struggles that can be faced. The social aspect is invaluable for some too, one of the things I’m most grateful about for playing football. Finally, the transferable skills and attributes of people picked up through sport are proven to benefit young people as they enter the professional world.

There are so many things to be proud of about sport in Scotland. The constant over-representation in Olympic Games and possession of so many accessible world-class facilities are just a few. However, there is always room for improvement and development. One thing I would change is the false or misleading perceptions that people can have about sport, which I feel can really hold it back at times. This can be within schools where it’s benefit to students’ performance or importance on wellbeing can be massively overlooked. Or the idea that sport is just for certain people, whereas those involved know that everyone should be taking the advantage of its benefits. Finally, something which I’ve discovered massively since becoming a part of the panel - if you love sport, there is a career in it for you! Overall, I’d love to see a continuous cultural progression on the importance of sport for everybody in society.

I believe there aren’t many things in life that provide as a good a selection of role models as sport. Whether it be for the idea of hard-work and humility of becoming successful from a challenging upbringing, advocating, and achieving political or social change or just showing how important it is to love what you do every day. Sport can be an amazing reflection of society. I’ve not been short of inspiration from sport all through my childhood and it remains true today.

​​​​​​​In 2017, I met an 18 year old rugby player, yet to make a first team appearance but showing promise at a pre-season tournament. Just under 4 years later I would get a picture with him again just moments after he became a Premiership Champion with Harlequins, before making his England debut a week later and becoming a British and Irish Lion that summer. Marcus Smith has been my biggest inspiration over recent years, not just for his incredible development as a player and hard work at his craft but for his maturity, humbleness and respect for others at such a young age. He demonstrates such vital values which can often be difficult to spot, especially in young players, the most important of those I believe is the way he shows how much he loves what he does.